Desire for knowledge and for musical culture, technical performance and music history research, teaching and organization of many important cultural events: all these are aspects of the eclecticism of Maurizio D’Alessandro.

After Secondary School, in 1986 he got a degree in clarinet at the S. Cecilia conservatory of music in Rome with V. Mariozzi as teacher. Later, he first gains a degree in chamber music with the Consortium Classicum in Fribourg, then he gets a master degree with Dieter Klocher and Karl Leister of the Berlin Philharmonic and with Peter Schimdl of the Vienna Philharmonic.
He studies basset horn with the great Hans Rudolf Stalder who describes D’Alessandro as a specialist of this instrument and this makes him one of the few clarinet players playing it as a virtuoso in public events.
D’Alessandro also approaches the study of musical practice of ancient instruments and attends seminars on ancient clarinet at the Civic Music School of Milan.
Later, he completes his education by graduating in Philosophy and Literature at the University Tor Vergata in Rome with Claudia Colombati and a thesis in Music aesthetics and philosophy.

In 1988 he founds the “A. Stadler Quartet” which gains some important results: they win the 4th Musical Interpretation competition in Turin (1989) and they also win the 4th International Competition in Capri Isle (1990). He took part in some TV programs by recording his music for the Radiotelevisione Italiana and he has often been guest in some programs broadcast by Swiss National Radio, Radio France, Argentine Radio-Television and by Vatican Radio. In 1995 D’Alessandro is one of the founders of the ensemble “Nuovarmonia” in which he plays the basset horn performing music by Piazzolla, Morricone, Disney and other contemporaneous authors; this group takes part in the concerts of Nuova Consonanza in Italy and abroad.
During these years, he frequently collaborates with the pianist Maurizio Aschelter and they carry out an intense concert activity and music research. He is also invited by Bussotti Opera Ballet to give some concerts. Also in this period he founds the Rara Ensemble: a chamber group playing innovative repertoires. He collaborates with the Lieder Ensemble directed by Fausto Di Cesare with whom D’Alessandro establishes a long human and artistic partnership.

He has developed a great experience in chamber music with different instrumental groups. As soloist, he performs in the whole national territory and he has taken part as a guest in some important festivals in Italy and abroad as well, such as the important Pablo Casals festival in Prades (France) and the Wilhelm Kempf in Juteborg (Germany). He has made concerts in Austria, France, Belgium, Germany, Hungary, Portugal, Spain, Canada, Argentine, Cuba, Arab Emirates, Pakistan and Kazakhstan.
D’Alessandro has collaborated along his career with many musicians, such as: Richard Galliano, Bruno Canino, Jeremy Menhuin, Fernando Suarez Paz, Hugo Aisemberg, Michel Lethiec, Fausto Di Cesare, Roberto Cappello, Paolo Restani, Marcelo Nisinman, Kasimierz Morskj, Denis Weber, Amaury Wallez, Andre Cazalet, Cristian Ivaldi, Benoit Fromanger, Jean Louis Capezzali, Manfred Reuthe, Janos Acs; he has also collaborated with the directors Matyas Antal, Marco Angius, Kazimierz Morski, Nicola Samale. He has been principal clarinet in the Philharmonic Orchestra of Rome and in the Mozart Sinfonietta. He has given concerts with the Strings Philharmonic of Aachen, the Chamber Orchestra of Oradea and the Orchestra of Kiev.
He has made for the first time in Italy some concerts for basset horn and the orchestra of Rolla and Stamitz directed by Francesco Fanna and he has also made some concerts for clarinet and the orchestra of Sussmayr and Eybler at the 1700 Museum of Ca Rezzonico with the chamber orchestra of Venice.
In 2002 he met the clarinet player Micheil Lethiec who calls him to give some master classes and concerts in France.
The beauty of his sound and his interpretations were underlined in 2006 during the Mozart year by Gernot Gruber of the Mozarteum of Salzburg.
In 2007 he was invited by the Presidency of the Italian Republic to give a very important concert at the Quirinale; the concert was broadcast live by RAI Radio Tre in Italy and by Euroradio in Europe.

D’Alessandro’s works have been published also by Harmattan editions in Paris, by Sciences Ministry in Spain and by the University of Salamanca, Spain. He is also author of the book Nel cosmo di Franz Liszt (Aracne editions 2012). He has given and still gives lectures on history of music and on instruments taking also part in the committee of many international contests.
He has collaborated with the American magazine “The Clarinet” and with the magazine “I Fiati”. He has often represented Italy in different international conventions of the Valentino Bucchi Prize Foundation.
Since 1986 he has been working on the intense music activity of the Castelli Romani area where he has been promoter of concert seasons, festivals, interpretation seminars and conferences. He is founder and artistic director of the prestigious Franz Liszt Festival in Albano Laziale. 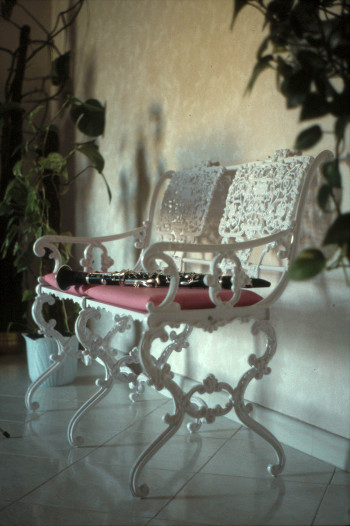 In education, in 1987 he founds an instrumental ensemble in the lower secondary school where for 20 years he encourages young students to collaborate with great musicians, thus creating an innovative experience in Italian educational system; for this activity, in 1999 D’Alessandro received the praise of the Minister of Education Luigi Berlinguer who considered his activity as an excellent experience in Italian education. From 2002 to 2004 he worked as tutor at the SSIS courses, by training young teachers.
In 2002 he invented and cured the research project “Tesori musicali del Lazio”, with the praise of Goffredo Petrassi. The aim of the project is to revaluate music and musicians of the roman area.
He has recorded Cds on the Italian 20th Century Chamber music (Bongiovanni editions) and on the repertoire of the 19th mid-century music for clarinet and basset horn (Alfamusic editions). His huge chamber and solo repertoire embraces Mozart and the 20th century music. It must be underlined his research on the Italian instrumental music from 19th to 20th century. For this reason he gives concerts for first week of Beni Culturali, Discoteca di Stato.
In 2010 he was invited by the Italian Embassy in Cuba to represent Italy in the 18th week of the Italian culture and he gave soloist concerts in La Havana with the National Symphonic Orchestra of Cuba.
At the Istituto Superiore delle Arti of La Havana he gave a seminar on clarinet and music interpretation.
In the same year he recorded the first world concert for clarinet of A. Copland in the version for jazz orchestra and live electronics cured by A. Polinelli.

In 2012 he was invited to take part in the Due più due Quartet. In 2013 he was invited as soloist clarinet in the first German performance of the Messa da Requiem by Ruggero Leoncavallo in Eschweiler. In 2012 he founds the Duo DaCapo with the pianist Massimiliano Caporale with whom he revises classic and jazz repertoires following both tradition and contemporary sounds. After meeting Enrico Pieranunzi, Within the house of the night is written for the Duo and this song is the last of the cd America in bianco e nero recorded for Widesound records in 2004.

Today D’Alessandro alternates artistic and scientific and educational activities. He keeps on giving concerts and giving lectures in conferences and international meetings, such as universities in Paris, Rome, Madrid, Salamanca…
Finally, he collaborates with Music Aesthetics and Philosophy department of the “Tor Vergata” University in Rome.